The Attorney General kept the lists of Acholi War Debt Claimants after verification which was done in 2016; hid the documents until Justice Okello Galdino Moro became Chairman of the Claimants 2020.
A total of 25,000 claimants in the first group from the 29 districts in the three beneficiary sub regions will receive their payments as each district will have compensation funding for its beneficiaries.

GULU CITY-UGANDA: President Museveni is using Acholi War Debt Claimants compensation as a bargaining chip to hoodwink Acholi sub region to support his government while they remain in perpetual poverty, evidently for last 36 years he has failed to pay those who bore the brunt of the worse effect of the war money amounting UG shillings 8 trillion.

On Sunday, March 27, 2022, president Museveni when launching the livestock compensation payments for claimants and beneficiaries from Acholi, Lango and Teso sub-regions mocked the beneficiaries that their expected payments will be the magic bullet to create wealth.

President Museveni told the people of Omoro district that, by voting Ojok Andrew Oulanyah in Omoro bye-election to replace his father the departed Jacob Oulanyah, the government is going to pay the War Debt Claimants UG shillings 1.7 billion.

In 1987, President Museveni used a combined rag tag forces of the then National Resistance Army (NRA) and Karamojong cattle rustlers from districts neighbouring Acholi, Lango and Teso to loot household property worth trillions of shillings and, all the livestock from northern and eastern of Uganda rendering the region very poor.
This was further compounded by the change of the new currency that many people in Acholi did not change their old currency with former president Milton Obote’s portrait and because of the existing conflict the people of Acholi were required to go and change their money from Lira town which not easy for the people of Acholi sub region.
Gilbert Olanya, the MP for Kilak South constituency in Amuru district, northern Uganda accused the Attorney General before President Museveni that the people of Amuru district were being paid UG shillings 50,000 per head of cattle, yet each was supposed to be paid one million shillings.

“Mr. President, I want to tell you that the Attorney General must be investigated for fraud, when the government earmarked UG shillings 50 billion, when you launched the payment for cattle compensation in Soroti, each district was supposed to get UG shillings 1.7 billion, including Amuru district. My people are telling me that they are getting 50,000 shillings and some people are being paid as little as150, 000 shillings”, Gilbert Olanya told President Museveni at Bar Alego state lodge, in Otuke district during a meeting of Acholi and Lango sub region last Saturday.

“Mr. President, I want to tell you that Mr. Jackson Kafuuzi is only paying ghost people, you find that the names of people who are paid are the aliens, and we wonder how the claimants like Mukasa and Kizza are being paid in Amuru district”, Olanya claimed.

The Kilak North, MP Anthony Akol who is also the Chairman of Acholi Parliamentary Groups (AGP), also added his voice accusing the Attorney General of deliberately refused to pay Acholi sub region claimants, saying it seems the government of Uganda is not interested in paying for the cattle which were looted by NRA in 1987.
“Mr. President, you are well aware that Northern Uganda has been ranked last year by Uganda Bureau of Standard UBOS leading in the poverty index, by failing to pay livestock looted from Northern Uganda; you are keeping our people poorer,” Akol lamented.

At the meeting Kafuuzi was ordered by the president Yoweri Museveni to response to the allegation heaped on him by Gilbert Olanya why debt claimants from Acholi sub region are being paid with a lot of irregularities.
According to Kafuuzi the deputy Attorney General they have send UGX1.7 billion to all the 19 districts of Acholi, Teso and Lango sub region of but there was an error in some disbursement.

“Mr. President , when we disbursed the War Debt Claimants money, we sent the money to each War Debts Claimant’s account, but we made a mistake, because many of the claimant’s money did not go into their account of recipients.”

Kafuuzi added amid murmurs of disapproval from Lango and Acholi MPs that in Acholi sub region districts of Amuru, Nwoya, Gulu, Agago and Lamwo money was sent in individual accounts, but for Omoro district whose claimants did not fill the yellow forms the money meant for Omoro will be sent to another district.

Justice Okello Galdino Moro, retired former Uganda Supreme Court judge in his reaction on Thursday June 16, 2022 admitted that the office of Attorney General has sidelined his office. The Attorney General in 2020 after verification of the names of people whose animals were taken by National Resistance Army, did not contact them when they submitted the lists for compensation.

Justice Okello said when members of Acholi War Debt Claimants Association requested him to follow the issues of their animals’ compensation which was deferred by president Museveni to settle the matter out of court.
In 2006 the Acholi War Debt Claimants Association took the government to court and in 2008 president Museveni directed the Attorney General to negotiate an out of court settlement through mediation.

“We finished the verification exercise in 2016, and the names of the War Debts Claimants Association and it was forwarded to the office of Attorney General, for scrutiny, so that after the exercise the approved all approved names would be admitted back to the original list of Acholi War Debts Claimants, but instead the Attorney General kept quiet, and never communicated back to us for four years until 2020.

Odong Adyera the founder member of Acholi War Debt Claimants Association three week ago while on radio talk show on Mega FM a Gulu radio station commented on the unexplained very low payment claimants are receiving in their bank accounts some of which are too little to even buy a goat in present day Uganda. 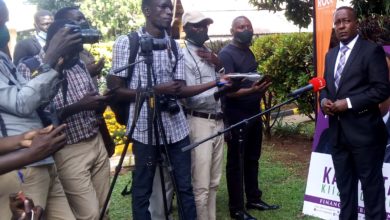 UGANDA: THE BUSHMAN MUSEVENI CLAIMED UGANDA OIL AS HIS, “MY OIL” WHEN THE OIL WILL OUTLIVE HIM.

UGANDA: AFRICAN BRAZILIAN JIU-JUTSU EVENT TO BE HOST IN KAMPALA