The Chairman District and District Land Board are peddling land grab. 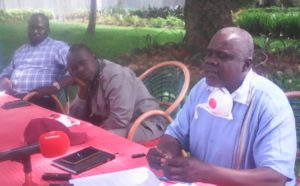 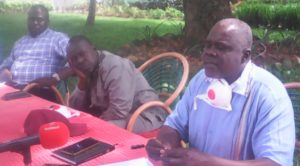 NWOYA-UGANDA: The learned professionals and institutions in Acholi sub region mooted that the current situation of land conflict in Acholi Sub Region are being engineered by Acholi elites and the district authorities working to achieve foreign interests.

Okumu Abuka addressed the media May 25th, 2020 in Acholi Inn, Gulu twisting in a body language of thieves; vomited out that Aswa Ololim-Kilak Game Reserve that was degazetted by late Dictator Idi Amin in 1972 is now a public land.

The Uganda Constitution of 1995 Chapter Fifteen under article 237 Land ownership clause (1) states that Land in Uganda belongs to the citizen of Uganda and shall vest in them in accordance with the land tenure systems provided for in this Constitution.

Article (3) Land in Uganda shall be owned in accordance with the following land tenure systems- (a) customary, (b) freehold; (c) mailo and (d) leasehold

Tony Kitara the led Counsel for MEGA FM. Local state-owned radio station in Gulu is one of the advocates on land issues. Kitara holds a divergence view.

“Those District Chairman and District LAND Board in Nwoya are conniving to robbed the poor of their land ownership rights,” Kitara said.

Oyeng Yeng News sources cough up with him and conducted exclusives interview.

Question: What is the current situation of land systems in Nwoya District, the Chairman of land Board says Nwoya land is a public land, Is that true?

Answer: First of all, there are only four Land tenure systems in Uganda. Customary, Leaseholds, Mailo and Freehold.

Specially speaking in law there is no public land, the 1995 Constitution permitted land Commission to measure government land and then district land board to managed local government land.

In so doing they hold it in trust with the community, and to the benefit of the citizen.

In law the general principal is that whoever alleges must prove, if government must prove that Nwoya district land in Olilim belongs to them, they must show which tenure systems among the 4 land systems qualifies them.

Nwoya district cannot prove Olilim by land tittle, then the land belongs to people, not a public land. Neither can Nwoya Local government claim it’s a customary land thus its under their management. Wrong; period!

In the absence of the four land systems, the land belongs to the people of Nwoya district, because they are holding it under customary tenure system, but not freehold.

They can also have a certificate under Customary tenure system, “as a lawyer I can say what Nwoya district is doing; I find it unlawfully, irregularity, and fraudulent.”

Responsible people in the district or Acholi Sub-Region need to bring to notice to Nwoya district leaders that their actions are scary, unconstitutional and foolish.

Sources from Alur chiefdom and Jonam who preferred anomaly say before the advent of colonial Uganda British Protectorate in 1900, the Jonam community was living in the current disputed place of Apwoyo Sub County in Nwoya district.

Rwot Ojigi of Alokolum clan who chaired the meeting on behalf of Rwot David Acana II who has been lock down in London accused the Alur of trespassing.

But is was ruled out, the then Prime Minister Prof. Apollo Sebambi ruled that the Alur district boundary it stop at River Nile.

The Acholi chiefdom resolved to appeals to President Museveni that the president should intervene in Nwoya land conflict, and settle the dispute that has been fuel by the Chairman of Nwoya District and Nwoya District Land Board which they claimed that the former Aswa-Ololim-Kilak Game Reserve is a public land.

That any Jonam or Alur who has land in Nwoya district has the right to use it, in accordance of customary land systems.

The Alur who normally cross the Nile with canoes are not respecting the cultural leaders and the issues which is suppose to be solve between the chiefdom of Alur and Acholi  the president Yoweri Museveni to come and solve the conflict which causing headeach.

UGANDA: CORONAVIRUS TEAMED DOWN GLOBAL WARMING IN EUROPE BY 50%.