Finally, the crying voice of nodding syndrome affected children being heard by the statehouse.

Let the government supply 30 iron sheets to each affected nodding syndrome children rather than using scapegoats to bring their cattle in Acholi Sub Region.

Gilbert Olanya, the Member of Parliament for Kilak South, Amuru district, Northern Uganda warns the statehouse not to take advantage of the situation of Nodding Syndrome affected children in Acholi sub Region by giving two cattle to few affected children, while militarizing the region by bringing cattle.

“The way I sees government urgent (Statehouse) is giving two bulls to few affected Nodding Syndrome children in Acholi Sub Region, is just appeasement policy to divert the current pressure of blocking Balalu in Acholi Sub Region, the crusade to kick Balalu which have started from Bolo Juk Lebi village, Bolo parish Awere sub county Pader district and now being extended to Amuru district where Balalu are being chase away by irate community.” The Kilak South Legislator coughed.

Gilbert Olanya elaborated that in the past the government promised to supply food supplements to over 10,000 the affected nodding syndrome children in Acholi Sub Region, this was in 2017, but the matter was never implemented.

The question of Nodding Syndrome is not (Ajongmiya) river blindness or Tsetse fly that courses nodding syndrome. But, the real courses were during Internal Displaced People’s Camps when people were forced into concentration camps, the Kilak South MP allegedly revealed

In 2013, the Acholi Parliamentary Groups (AGP) took the affected nodding syndrome to the USA Atlanta Center for Disease Control CDC, and bore parts of deceased nodding syndrome. APG was led by Batrcace Anywar, the then Women MP for Kitgum Municipality, the current State Minister for Environment in Museveni led regime

Two nodding syndrome mother’s daughters of Charles Mackey Ojok 54 years old, from Bolo Agweng both aged 20 and 22 years old and a son could not hide their excitement on 22, December 202 by the time statehouse delivered two bulls to support the nodding syndrome.

“For years, I have been suffering with my three children affected by nodding syndrome, looking for food supplements, it has been hard to feed them, getting food, and financial support for the last 22 years has been a default task, beside getting medication for them. Now since the government gave us two bulls, at least this will give me time to have mass production.” Ojok Mackey told the Black Star News.

Cavine Aloyo the mother of two kids who is one of the affected with nodding syndrome in Bolo Agweng parish, walked to receive two bulls, the support from statehouse with her two side by side. The world must be craggy. Deep inside, she would be remembering the long journey and misery agony attack of the misery nodding syndrome diseases. She came all along the way from Awere Secondary School in Odek Sub County, Omoro district where she happily married.

Aloyo Cavine, to a stranger, could come with the term when told that she is a victim of the nodding syndrome affecting children, she is a healthy walk and majestically fit. Without the symptom of seeking head or nodding, the deity Olal Teng of Puranga chiefdom would have let them have faith in God.

The father, Ojok Mackey, also confirmed to ally with his daughter’s remark, for him, says the nodding syndrome now is coming of late with the signs similar of two cimo. No nodding or seeking of the head. But, when the moon is ending the attacks appear until a new moon comes, Ojok narrates.

“Although we have received these animals at the tail end, the support toward the nodding syndrome is a beacon of hope. We know in Bolo Agweng and Bolo parish we have about 600 households whose children are victims of nodding syndrome. Those who did not get statehouse support of animals also should be supported.” Ojok Mackey appeals.

Adds that there are some households who have more of the children affected with nodding syndrome, while other households have single affected Nodding children.

Geffrey Orach 45 years old, from Atede parish, Awere Sub County is still in his early years. He told Black Star News that for him, he sees no future in his affected nodding child. Because the attack is frequently violent.

“I have a boy of 16 years old, which means the nodding syndrome affected him just 15 years ago compared to the children who got infection early. But, the beauty is, now when we received two bulls, my boy smiles, and even now is looking after the cattle. The only thing I’m looking for is to get the Ox plague.” This is a beginning to get rid of poverty, and sooner there will be a big harvest.

However, if the government can construct boreholes in the affected nodding syndrome areas, to avoid more drowning of children affected by nodding. Because we have lost 15 children who go get water, and they fall into a pool of water.

“Now that we have got support from the government, how about the four families who have lost all their nodding children, is the government going to support them too.” Orach questioned.

Jacklyn Akello, the In-charge of Awere Health Centre III, Pader district could not hide her joy as tears rolled down her check. As deplorable nodding syndrome children struggle with the glib to see livestock come in their names after 15 years of chronic nodding, God is great.

“A week ago, the statehouse groups of statehouse gave 20 livestock to our nodding syndrome children as part of a food ration to boost their immunity, I saw for the first time signs of head drop being reduced, “Nodding of the head from the affected children who have now grown big. Akello lamented.

Jane Barekye, head of Uganda Statehouse gave 2 cattle to each 20 households in Awere Sub County which includes 13 Sub Counties in Pader district which has been badly affected by the Nodding Syndrome.

“The 20 pairs of cattle we have given to this badly mal-nourished nodding syndrome is part of the government intervention, we have realized that these nodding syndrome children needed food stuff to boost their immunity. We are going to give more livestock.” Jane Barekye argued.

Calvin Lukwiya, Awere Sub County Local Councilor 3, demanded that Awere Sub County and Atanga Sub County due to overwhelming numbers of nodding syndrome that stand at 500, the government should have considered building a Nodding Syndrome center for the affected people.

Calvin Mwaka Lukwiya insists that should the government fail to give more than 600 households of the affected children in Bolo and Agweng Parishes, they will be forced to call for a massive media campaign that will attract local and national politicians in the regions.

James Ojera Latigo, formerly a student of Master in Apply Community Change and Conservation Future Creation University of Western Vigina in the USA.

The Black Star News caught up with him in an exclusive interview to ask what his research was finding?

James Ojera Latigo says, first of all in the context of Acholi where the research is center, there is a world view in effect, that there is symbiotic relationship between man, nature and revocable between nature.

So that all fairs of all people should be maintained, if you maintain that symbiotic relationship between man and nature, now the problem is normally if that relationship is broken it distorts the balance.

It can have manifested in man in many ways, so you need not revise that with the advent of colonialism which right from inceptive it was the concept mind of the intellect.

Right from inception they want to control us, that coupled with the entire man and its greed, man has destroyed it symbiotically driven by greed, man greed destroyed nature.

“The relationship with the spirits world has been ignored, we know that Acholi land has been a theater of conflict, the risk between Acholi blood culture. Human blood is very secret. When you spill human blood, you are defying the soil.”

Those whose blood has been spilled have spirits, once you spill that, you destroy the spirits. That blood needs to find the place. Nature spirits want to look for the place of abortion it become marauding spirits, it becomes “Cen”, ghosts.

When you give the spirits a place of abort it becomes a resting place, of which during the LRA conflict such consideration was not taken.

Ojera argues that Acholi land aftermath of over two decades conflict they leaders including religious leaders requested the NGOs to support them for ritual cleanses, so, the COS and NGOs working in Northern Uganda gave them cow and supported them with vehicles to ferry people to make cleansing ceremony in all places where there was massacre.

At one point, when such support was given to religious leaders, in one place Palabek in Lamwo district, when the ritual cleansing was being conduct because the all-girls in that primary school had mental breakdown, when the religious Balongokle were performing spiritual cleansing, three old men was sitting in wondered under a tree.

“So, when I approached them, and asked them what was the matter, “Tumu cere pr kitumu kumeno, kitumu ki romo” the three old man talked in wondered, their response was that, in Acholi such bad omen need ram for cleansing and chasing away Cen, ghost from these girls who have developed mental illness.” Ojera narrated.

However, the religious leaders resorted to cleansing bad spirits with cows.

“Then I saw the old men sitting under a tree, they were wondering. When I asked them why, they said they need sheep only. I got for them a sheep, when I went to Balongkole and told them what the old men had told me, they refused to listen to them, but when I confronted them those people allowed you to perform your religious rights, why can you give them too to perform their cultural cleansing.”

Finally, the old men did their ceremony of cleansing spirits, when they slaughtered sheep, they asked those mentally ill girls to pass stepping and walking on blood, the next day they all came back healthy.

The finding is that we have broken that relationship, to solve it.

With the nodding syndrome, it starts with each homestead, tipo Kwaro wa belong to Abila ritual serine, where all ancestral oracles dwell, if the cleansing ritual of Abila is done, nodding syndrome will go away.

“Now that speaks to many other social evils in Acholi massive, Acholi land from generation x, now if we do not restore this relationship it will become an extinction of Acholi.”

Dr. David Kitara Lagoro from Gulu University however, his finding on nodding when conducted research says. So, what we are to reconstruct is to find what is the cause of nodding syndrome, but I would like to say that neurological disorder if I go back in the history of America. American had a problem in the Far East Asia they had a condition called Amlottopical lateral Calorizing disorder or the warmth disorder, it happened in the 1940, it was only in the 1970 and the 1980 that they successfully managed to describe what was causing neurological disorder.

Because it takes a long time to be there, by the time it reaches the brain the pathological process may change and substance may disappear, my view we need to give ourselves time to view and find out what is the cause of neurological disorder.

In conclusion about three thousand have been affected according to medical report from Ministry of Health, the most affected areas are Odek Sub County in Omoro District, Tuma Ngur in Labongo Akwang Sub County in Kitgum district, Atanga Sub County and Awere Sub County in Pader 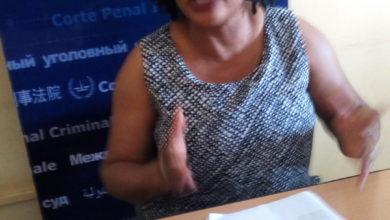 UGANDA: JOSEPH KONY IS STILL WANTED AS ONGWEN’S TRIAL COMES TO A CLOSE