.The Luo Gang, later Acholi prostitution were a taboo, and woman or girl found practicing position her private part would be paraded, the legs would be open apart, and simsim would pour in her virginity and Chicken would be drive to feast on

Author Yahoo Akoto GULU-UGANDA: With the advent of NRA guerilla led forces by Yoweri Kaguta Museveni in 1986,  and eventually purging of the former Uganda National Liberation Army UNLFA and the new formation of Uganda

Democratic People Army UPDA led by Erick Otmema Alllimadi, the former Uganda Prime Minister during the  Obote II government.To many Ugandans in South-Western Uganda who  had thought when Uganda got independence in  1962, euphoria and new hopes that swept through Uganda were just the tribal making of the Luo President Apllo Milton Obote,

So, to them there were new dreams and expectations as the colonial master packed their bags and handed over the instrument of power to Dr. Obote, little do the Baganda, Banyankore, Toro, Bakiga and Bunyoro.

Their dreams,was to attain fully independence from the Luo dynasty, this was the end of a long freedom struggle in which so many had suffered, to them it was the end of slavery, human degradation and exploitation.

However, their dreams were soon shattered as President Obote reaffirmed his commitment to the rule of law, and position a new crops of leaders from the Uganda police forces and began to fill in the vacancy in the Uganda Army by positioning elite guards, the likes of Brigadier  Perino Okoya  the late Deputy Uganda Army Commander.

The late, Major General Ojok Oyite and his nephew Akena Adoko who was the Director of Uganda State Research Bureau  to take care of the Uganda Army.

Meanwhile, in Uganda Police Forces, the elite police officers who took over from the British Colonial master, were Eroniayo Oryema, John Odongkara respectively was deployed as Inspector General of Police and Director of Uganda Police Special Forces, to dismay of the Bacwezi Kingdom.

Thus, the Bacwezi Kingdom when the new military rule of Idi Amin, the 1971 coup d’etat. The Banyarwanda who were the back born of Obote I government had gained entrance in Uganda State Research Bureau to become part of Amin’s dreaded forces to alienate the Acholi and Lango tribes who were the forces behind the Obote I government.

The wind of change, came when Ugandan dictator Museveni was introduced by the then former British Prime Minister  Margret Thatcher to the U.S.A president Ronald Reagan.

Where the world minerals are destines to be.This follows the collapse and fall  of the Berlin wall.

However,  America did not take the comment of the last former  USSR president Mikhail Gorbachev, the  Emperor of USSR, who said and insinuated that the biggest  world wealth are in Arab  world, that is oil and gas.

Mikhail Gorbachew also said in Africa, the biggest world wealth can be found in the impeachable Ituri forest of Congo.Suddenly.

This prompted the USA and the British and Ugandan strong man  Sabogabo to rust for Neo conquest of DR. Congo thinking that there was this realization that the men of  Rwanda had to be free-free from the Luo Density domination led government.

Because of wind  of change that was blowing through Uganda when  the Obote II government under ceased, the Obote’s regime was being ruled by warlords, the likes of Peter Otai, Paul Mwanga, Oyite Ojok, Bazilo Olara Okello, Tito Okello, Christ Rwakasisi.

Uganda tyranny Museveni took to Luwero Triangle to wage war on Obote II UPC government, the revolt which was mainly spiritual, was meant to drive the Luo presumed Anya-nya from the reign of power.

Museveni had to Mobilize the Bantu masses for the forefront in a fight for self-determination. Museveni’s five  years guerilla  unrest which called new liberation and human dignity were in action in Luwero district in Central Uganda.

Where the war gaining ground organist the backward forces, where the  astonishing success of anti- Anya-anya war  crusade drive in Luwero triangle  was ganing full forces.

.Behind the scene in Luwero triangle was orchestrated rapping young girls, women and sodomy  was taking place under clandestine fifth  columns was  just going on. But, the  UPC led government were accused  to be behind the wrong  in Luwero triangle,.

The crusade drive of rapping young ones were the business in Luwero , it was really  an inspiration for  the Museveni’s men  that brought them to power  in  1986.

The Museven’s revolution gained momentum through when the new rebels  in northern Uganda were formed, the NRA forces  who short their young girls taking them to Army barracks, and the  kind of brutality lasted for 20 years during LRA conflict in Northern Uganda.

This is how the teenage virginity were destroyed  in Acholi Sub Region .The worst incidence happened in Acholi-Bur 20 kilometers north of Kitgum town the then NRA soldiers would get the girls in the evening, take them into their barracks  killed them and later in the morning when they would parade their  heads and pitch on sticks along the road.

However, with the advent of Juba Peace Talks in 2006 Acholi community  welcomed and said Juba peace talk was  a bacon of hope, they thought  change which was inevitable, finally has come  and various national rulers from Acholi in Diaspora and the Lord’s Resistance Army LRA leaders applauded the Juba peace talk

.Thinking that  raping of their girls would come to an end, the defilement which was taking place when they community was in Internally Displaced People’s {IDPs} camps would no longer be there.

“The dark 20  years plus  of human degradation  where  law  and order was preserved for the occupational forces, people who moved out of the IDP camps to their villages would enjoy peace and freedom.”

the young population of children born in the IPDs  who did not have opportunity for batter education will  attain schools, but the new hidden agenda by the government soon came in with a new law of defilement. Many children faced  arrest as the parents begin to look for economic gain in the names of defiling teenage girls who were being rapped by the tormentor NRA, politically cord named UPDF.

“Thousands of young boys have been picked up under new law and  locked up across Acholi land, this was under Museveni’s hidden agenda ofi led  occupational forces.

.according to Oyeng Yeng News investigation team,  today in Gulu City to be, there are so many young girls in thousands littering in the streets  in-search  of money by just selling their bodies (prostitution).

There are new pheromone in the sex prostitution that involve not only young girls, but even  house wives as sex workers, by 7.30 PM local time GMT11.00 hours, most of Gulu main streets, women are roaming along the streets. they even book Limwelo Hotel as one of the sex hub.

Odong Mwaka 96 years old, the Local Councilor I of Pece Vanguard says the most affected road is Acholi Road in Gulu town, where many women are pushing young girls to front for them, as they stay in dark places for fear of being seen by their husbands, “he said.”

“The vicious of prostitution has gone now to married women who are living with their spouses.”

Odong says the vices of prostitution it  does not spare either political elected figures  like  MPs, he argued.

Last month Gilbert Olanya, the area Member of Parliament for Kilak South, Amuru district in Northern Uganda one of the girls he used as his side dish, was expectant, a lady we can not name, when her time to deliver came, gave birth at the gate of the Kilak MP.

But, by bad lack, Olanya the Legislator says those are the prostitute in Gulu town, but confirmed the lady is girlfriend.

The shocking level of prostitution in  Acholi Sub Region has gone overboard, in Gulu Town Abalo who live along Andrea Olal road, because of the new vicious of prostitution, one of the   Colonel in the UPDF is sharing that lady with his real brother.

The advent of LRA Juba peace talks never solved Northern Uganda cultural value, although there has been peace in the making.

Next time we shall look on land conflict . 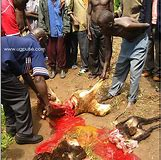 UGANDA: NO IMPINITY IN AFRICAN ETHNICITY

UGANDA: MUSEVENI USE THEORY OF GEO-POLITICAL CONFLICT TO CAUSE WEAKNESS IN NRM PARTY.